Watch Noel at a recent performance in St. Paul:
Noel LaBine Performing at the Coffee Bene

If you would like Noel LaBine & Friends to perform at one of your functions please contact: noellabine@gmail.com

If you would like Noel LaBine & Friends to perform at one of your functions please contact: noellabine@gmail.com

UP COMING SHOWS in 2020:
Seeking bookings

ARCHIVES:
The following dates and times already performed in 2019 AD:
January 4th
Cafe Bene: Noel LaBine shared the stage with Richard Rousseau and Laura Packer
February 16th: Noel was part of  a Variety Show at 11499 Martin St. NW, Coon Rapids in the Unity North Spiritual Center.
May 4th: Noel was part of  the Festival of Nations show at the River Center in downtown St. Paul. He performed as three different French Canadian Ancestors.
August 17th: Guidry-Pettipas Confernece on Prince Edward Island. Noel LaBine performed as a descendant of the Arcadian's and told humorous stories about his personal adventures.
September 28:
Noel LaBine was a finalist for the Great American Story Contest held in Park Rapids on September 28, 2019 at 7 pm. The event was held at Calvary Lutheran Church.

Master Storyteller Richard Rousseau was the Emcee for the event and also entertained with his stories.
October 19:  Noel performed at the Unity North Spiritual Center as a part of their bi-annual Variety Show event. He told a story called, A Yankee In the South.

The following dates and times and performances in 2018 AD:
Noel’s stories recall memories from his childhood in 50s & 60s in rural Western Minnesota and farming experiences and traveling adventures in the 70s & 80s. His talent for including an element of surprise and lessons learned make these caring, touching, engaging, inspiring and uplifting stories worthwhile entertainment. A humorist at heart, Noel engages the audience in a fun-filled way.
Most often talented musicians, Rocky Mjos on the ukulele (www.ukuleledrive.com) and Peggy Larson, vocalist (www.peggylarson.com) team up with Noel to create entertaining performances with a variety of jazz, rock n roll, folk and musical score from movies.
July 12th
Waseca County Fair on Thursday July 12, 2018.
October 27th
Unity North Spiritual Center Concert
November 24th
Telebration Open Mike at Open Book on Washington Avenue in Minneapolis, MN
The following dates and times performed in 2017 AD:
January 8th
Sunday morning at the Pilgrim Church on 1212 Highway 96 in Arden Hills. The service started at 10:15 a.m. and the performance was at 10:40 a.m. Rocky Mjos and Peggy Larson and Noel did a 45 minute show.
February 25th
Saturday evening at 11499 Martin St. NW, Coon Rapids in the Unity North Spiritual Center. Noel told a story as part of a local talent concert.  Treats and tea afterwards.
Noel LaBine & Friends  performed at some of the County Fairs in Minnesota this year. .
July 22nd (Saturday)
Marshall County Fair in Warren, MN in the band shell.  Afternoon times to be determined.
August 4th (Friday)
Sibley County Fair in Arlington, MN in the band shell at 3:00 pm and 4:30 pm.
Noel LaBine & Friends are actively soliciting opportunities to perform at some of the county Fairs in Minnesota in 2018. Hope to see you at the Fair(s)!

The following dates and times performed in 2016 AD:
May 27th:
Friday evening at 2001 A Space on North Fifth Avenue (two blocks east of Jax Restaurant in NE Minneapolis). Show started at 7 pm. Noel was one of a few performing artists and he told a story called, "The Flood Battle of 1960".
June 17th:
Banfill-Locke Center for the Arts in Fridley on a Friday evening. Celebrated recently published book,  Lessons Learned Through Chaos and Mayhem from Northwest Minnesota, a collection of over forty short stories created for storytelling performances at The Moth on stage at the Amsterdam Bar and Hall, as well as Cheap Theatre at the Black Forest Inn and other venues. Musicians Peggy Larson and Rocky Mjos enhanced the celebration with their music.
June 24th:
The Argyle Historical Society hosted an event on Friday afternoon June 24th at 2:00 pm at the annex to the old Argyle Depot.  Featuring local storyteller, Noel LaBine, and musicians Peggy Larson and Rocky Mjos.
October 14th
Friday evening special with Noel LaBine & Friends Peggy Larson and Rocky Mjos in the Festsaal Banquet Room of the Black Forest Inn on 26th and Nicollet in uptown Minneapolis. Noel told 8 stories in between a better number of songs by Peggy and Rocky.

October 28th
Friday evening at 2001 A Space on North Fifth Avenue. Noel was one of a few poets and authors performing, and shared a story about Halloween Pranks involving stolen cars.
November 12th
Saturday evening at 11499 Martin St. NW, Coon Rapids in the Unity North Spiritual Center. Noel told 8 stories in between an equal or better number of songs by Peggy and Rocky. Basically a repeat of the October 14th performance. 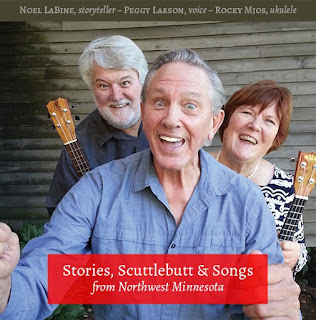 Lessons Learned through Chaos & Mayhem From Northwest Minnesota.
(40 short stories from my past).

Crossing the Stream
(adventures in Vietnam, Bangkok and travels in America after my return).

Arizona Connection
(a fictional thriller that takes place during catastrophic times in the future).

Posted by noellabine.com at 12:27 PM No comments: